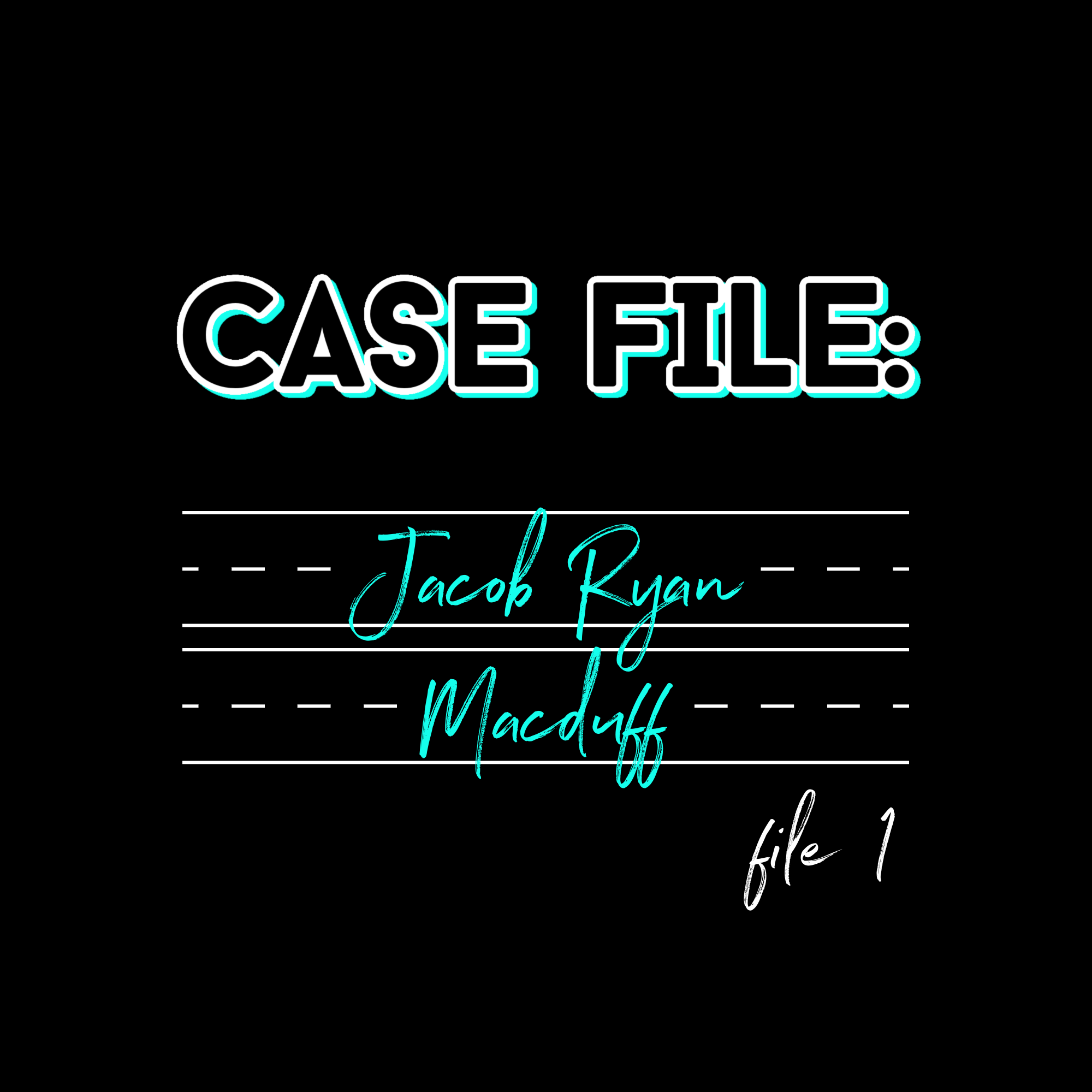 This is the first episode in a series that will be updated periodically with new information about the case as it becomes available.

Jacob Ryan Macduff was a 26 year old white man living in Tigard with his friend Theresa when his mental illness took a turn for the worse. For days Theresa called Tigard emergency services to get crisis support for Jacob as he suffered through the throes of mental illness crisis. He was manic, pacing, slamming his head into walls, unable to calm himself or make peace with reality.

On three consecutive days, speaking with 3 different officers, Theresa would call and be told the same thing – to deal with it herself, they “didnt want to poke the bear”

Finally on day 6, the police finally came out to the apartment complex. The Oregonian reported that dispatch logs indicate police were warned by callers who had concerns about Macduff’s mental health, Chapin said she told police this when they arrived too. But they were there because the apartment maintenance called the cops to arrest Jacob for property destruction, so the call was labeled a domestic disturbance call.

According to witnesses (and the cops but fuck them because they lie) Jacob had locked himself inside his truck in the parking lot of the apartment complex. There was a swiss army keychain type of knife in the truck with him. The officers claim that Jacob refused to disarm himself and in an ensuing scuffle, the police shot Jacob with lethal rounds, killing him.

Tigard Police would neither confirm nor deny if the crisis team was called during the incident with Macduff.  Washington County (where Tigard is) has a dedicated crisis response team that was supposedly active during the time of Jacob’s murder.

As we dig into the details of these cases (at least what we know so far) remember that the cops LIE. They have far more motivation than anyone else to lie about accusations of misconduct – They have the badge, the union, and the public on their side. People in crisis often have only their word against the cops. Possibly the family or friends word against the cop. Let’s be honest – the public, especially white people, LOVE to find any excuse to shift the blame from the cops of those in power.

The public in general never sides with the mentally ill person or their family against the cops. Telling the truth against people with all the protection takes a huge amount of bravery and belief in your story as one that matters for people to know.

That being said, let’s talk about what Theresa says happened, then you can hear from the cops.

Theresa was on the balcony of her apartment at the time of the shooting, she had tried to be out there with the cops and help with Jacob, to help, because he was one of the only people he felt safe with in crisis.

She was *NOT* allowed to go help or even be near because the police told her she was the victim and needed to stay inside. Remember the cops labeling it a domestic disturbance? It didnt matter that she had called multiple times for *crisis response* It meant that they labelled Theresa a victim, which she adamantly denies.

While on her balcony she heard gun shots, as soon as she heard them, she took off towards the stairs to go to him. A friend stopped her, telling her she would be shot too.

“I was on my balcony and I heard five gunshots,” Theresa said. Then she said there was a long pause before she heard another five gunshots, ten in total.

At the vigil, I had the privilege of meeting more of the residents of the area – many of which either struggle with mental health concerns themselves or have family that they are terrified to call for help.

Here is what the Tigard Police Statement says in regards to the “Officer involved shooting” aka murder by cop or botched crisis call, which isnt much because of the way Officer Involved Shooting investigations are conducted and the generous union protections.

On January 6, the day of the shooting, they published the following press release:
“Officer-Involved Shooting in Tigard Around 5:47 p.m. our officers were involved in a deadly shooting near SW Hall Blvd & SW Bonita Rd. A man was pronounced dead at the scene. No officers were injured. The Washington County Major Crimes Team is investigating, and any additional information will be released by the Washington County District Attorney’s office”

The following day, on January 7, they released another statement:

“Tigard Police Department can confirm that Tigard Police Officers responded to a reported domestic disturbance at an apartment complex near the intersection of SW Hall Blvd. and SW Bonita Rd. at approximately 4:04 p.m. Upon further investigation, Tigard Police Officers attempted to arrest the suspect, Jacob Ryan McDuff, age 26, for domestic violence. Officers confronted Mr. McDuff in his vehicle to effectuate their arrest and discovered that he was armed with a knife. Mr. McDuff refused to surrender to police, and during the struggle to arrest Mr. McDuff, a Tigard Police Officer shot and killed Mr. McDuff. This officer involved shooting remains under investigation by the Washington County Major Crimes Team and additional details will be released when they become available.”

After those two press releases, those were really the only bits of that were out there. And the news jumped on them. So, all of the initial reports to the public, were that the cops killed someone who was wanted for domestic violence, and had a weapon that they refused to drop. So immediately, the public did not give a fuck that this man was dead. They had no idea of what the situation actually was, and once they heard that it was a domestic violence suspect that was shot, they didnt care to learn any more. The corrections and things like that, those help, but they dont help when your mind is already made up that the cops got somebody who is violent or useless off the streets. So even when the additional information about the mental health crisis started to come out, people already had in their minds that Jacob was bad, so before he was bad because he was a domestic abuser, now he’s bad because he was crazy and he wasnt taking his pills. That’s a fucking problem.

And that is the fault of Tigard Police and the local media that did not even do any other interviews and just repeated what the Tigard Police said without question.

On the same day that they put that memo out, which was January 7th, I went out to hold a sign on the sidewalk and start community outreach, several people joined us, we set up a vigil site and I spoke extensively with Theresa. Basically getting the story from her and then seeing the additional news reports confirming those details as actual professional interviewers and professional, trusted reporters went to go get the full story. All of this information I heard directly from Theresa and then it’s been confirmed in the news.

Later that evening a group of about 100 protesters in Tigard marched through downtown demanding justice for Jacob and an end to cops responding to mental health calls. Most businesses in the area had already boarded up in anticipation. There was some tagging (mostly of the plywood used to board up glass) and small amounts of vandalism, but really, it was a march to the Tigard PD to break windows and tell them that the community is watching them and will hold them accountable.

On January 8th, Chief Kathy McAlpine held a press conference about the Officer involved shooting. She coolly and calmly repeated that she really couldnt comment on the officer involved shooting but she got choked up over the public demonstration that ended up with the Tigard Police station’s windows broken. Here’s a clip:

“It is absolutely disheartening. I mean, it is look at this. I mean, this is just our house and it is our house and it is this community. When you go out in that downtown corridor those business owners are been affected by COVID affected by wildfires their businesses are, if they haven’t been shut down, they’re hurting in an holding by a thread and to have this subjected to them when they did nothing, they did absolutely nothing has nothing to do with them is is disheartening. Just as a natural leader, you feel responsible, because so my heart goes out to them. I’ve been communicating with them. We’ll support them in any way that we can. But I am utterly disappointed. angry, and I don’t think anybody here wants to stand for that. Thank you for asking.”

On January 14th, 2021 Tigard Police Chief Kathy McAlpine released a 2 page letter to the community about the murder:

It’s difficult to find the words for what our community has experienced in the last week. Many people have questions and are hurting deeply. It comes after our officers responded to a domestic disturbance on January 6th, where they developed probable cause to arrest Jacob Macduff. While attempting to

arrest him for domestic violence, officers discovered he was armed with a knife. During the struggle to arrest him, one of our officers shot and killed Mr. Macduff.

I want to begin by saying any loss of life is tragic.

This has had a tremendous emotional impact on all of us. The Tigard Police Department was founded on…”

That was about the first quarter of the first page, the rest of the time she goes on with copaganda about the Tigard Police Department’s history and general information about how investigations work. She continued the narrative that it was a domestic disturbance and not a mental health crisis call. She continued the narrative that he was a violent man who refused to disarm himself. Even though she “cant comment” about the rest of it. Because all the information is supposed to be filtered through the Washington County District Attorney’s Office. Because theyre the ones conducting the investigation on the Tigard Police Department and their handling of the shooting.

And according to her, the descion as to whether or not the murder was justified falls solely on the shoulders of the Washington County District Attorney – Kevin Barton.

As of today, on January 21, 2021, the only mentions of anything regarding the murder of Jacob Macduff have been about catching members of the public involved with the demonstration. 14 days of silence.

One comrade commented to me about the methodology of breaking windows at cop shops as a response to police brutality or murder – “If we could get 10,000 people in the streets willing to stand up and march for justice peacefully, we wouldnt need 100 people to go break windows.”

That’s all we have for today. When we have more details of this case or other ways you can support, we will put out a new episode.

You can find Gofundme’s for both Jacob Macduff and his case and Theresa, the roommate, who is dealing with the aftermath, and the crisis, the trauma. And, potentially needing to find a new place to live after all of this happened. And so there are gofundme’s in the show notes available. And stay tuned, tomorrow we will be dropping the episode about Patrick Warren, Sr.